OnePlus and Xiaomi are brands with humble beginnings and products earmarked for price-conscious consumers. Several years later, both have much more expansive product portfolios, with devices across a broad range of prices. Their latest premium offerings — the OnePlus 10 Pro and the Xiaomi 12 Pro — offer great value for the price.

Both phones are flush with premium features and bring massive upgrades over the previous generations. This comparison is specifically for those on the fence about buying one of the two power-packed smartphones.

Turning over to their backs allows us to differentiate between them relatively quickly, thanks to their brand logos and camera bumps. Both devices feature noticeable protrusions that house the camera assembly. The OnePlus 10 Pro has a square camera arrangement, with three cameras and a circular flash. The Xiaomi 12 Pro, on the other hand, uses a rectangular camera bump with three cameras aligned vertically, with the primary camera significantly more prominent than the other two.

The OnePlus 10 Pro and the Xiaomi 12 Pro offer similar security against drops and nudges. Both use Gorilla Glass Victus to secure the display, while the backs of both the phones are protected with Gorilla Glass 5. However, OnePlus takes the lead in protecting against dust and water with IP68 protection.

Both companies have distinctive approaches to the backs of these smartphones. The glass back used on the OnePlus 10 Pro features a grainy pattern under frosted glass. Although the glass back looks predominantly matte, the design underneath flares through when an intense light falls on it. The same applies to the black and green variants of the OnePlus 10 Pro but not its limited-edition white variant only available in China.

Xiaomi also takes a similar approach with its flagship phone’s gray, blue, and purple variants. But like OnePlus, it also sells a special edition of the Xiaomi 12 Pro, limited to China. The limited-edition green features a premium finish crafted with vegan leather — a design trend recently emerging in the Eastern part of the world.

The Xiaomi 12 Pro and the OnePlus 10 Pro both measure between 8mm and 9mm in thickness and do not differ much when held in the hand. It is difficult to call a single winner here because both phones are built to please your eyes.

Talking of their displays, both the OnePlus 10 and Xiaomi 12 Pro offer an immersive experience with low-temperature polycrystalline oxide (LTPO) AMOLED panels that support variable refresh rates up to 120Hz. Both smartphones feature displays with WQHD+ resolution and are furnished with second-generation LTPO panels, allowing more seamless variation in the refresh rate. When the image displayed on the screen is static — i.e., the display does not need to be refreshed — the refresh rate of an LTPO 2.0 panel effectively reduces to just 1Hz. This allows for lower power consumption and better battery longevity.

While both have similarly battery-efficient displays, the Xiaomi 12 Pro’s display is brighter. Furthermore, the display used on the Xiaomi flagship also supports HDR codecs such as Dolby Vision for an enhanced viewing experience while consuming content on apps such as Netflix.

Hence, if you prioritize battery, the OnePlus 10 Pro is the right choice. But if you want better display performance and intend to use it for content consumption, the Xiaomi 12 Pro serves you better.

The OnePlus 10 Pro and the Xiaomi 12 Pro are stocked with Qualcomm’s Snapdragon 8 Gen 1 chipset for unremitting performance. You get options between 8GB and 12GB of RAM and built-in storage up to 256GB on both devices. Regardless of the task at hand, both performers will hardly disappoint. Both phones also feature multilayer internal cooling systems to dissipate heat more efficiently during demanding workloads.

In terms of the battery, the OnePlus 10 Pro gets a slightly bigger battery rated at 5,000mAh, while the Xiaomi 12 Pro packs a 4,600mAh battery. Although the batteries are big enough to offer day-long battery life, Xiaomi offers much faster recharging, thanks to its 120-watt fast charging technology that can replenish the battery in just 18 minutes.

The OnePlus 10 Pro, on the other hand, is limited to just 80W fast charging internationally — and 65W in North America — using Oppo’s SuperVOOC charging technology and takes over 40 minutes for its battery to charge fully. Both phones also support fast wireless charging at 50W, but you will need respective proprietary wireless chargers to use their abilities.

Both phones also require proprietary wired chargers to achieve their highest charging speeds. If you use a generic charger, then the OnePlus 10 Pro will charge much more slowly because it only supports the older USB-Power Delivery standard. The Xiaomi 12 Pro, contrastingly, supports the newer USB-Power Delivery 3.0 and Qualcomm Quick Charge 4+ along with the proprietary HyperCharger standard.

The software experience might have a monumental impact on your decision. The Xiaomi 12 Pro runs MIUI 13 based on Android 12, and for the unaware, MIUI is an Android overlay that is visually similar to iOS. Xiaomi has even adapted the iOS Control Center but gives you the option to turn it off and switch to the standard Android quick settings panel if you prefer. Meanwhile, the OnePlus 10 Pro runs OxygenOS 12 based on Android 12, which many users must be familiar with. Despite its familiarity, OxygenOS undergoes a fundamental change on the OnePlus 10 Pro as compared to previous phones.

OnePlus’ OxygenOS now shares a common codebase with its sister company, Oppo’s ColorOS. From elements such as the system font to the descriptions in the Settings app, you will notice new elements throughout the user interface that were not present before. Some features, such as the reading mode, have also been removed. Therefore, it might disappoint you if you were planning to buy the OnePlus 10 Pro purely for its software.

Although the software experience is subjective, OxygenOS is relatively closer to stock Android, while MIUI is planted with several features for you to explore and tinker with. For anyone looking at longevity, both companies plan to offer three years of software upgrades followed by another year of security updates.

Speaking of their cameras, both phones produce phenomenal results backed by cameras to challenge flagship devices such as the Samsung Galaxy S22 Plus.

The OnePlus 10 Pro features a 48MP primary camera with optical image stabilization (OIS) and laser autofocus. It utilizes a Sony IMX789 sensor measuring 1/1.43 inches along with an f/1.8 lens.

Meanwhile, the Xiaomi 12 Pro features a larger 1/1.28-inch IMX707 sensor by Sony for its primary 50MP camera. Even though the resolution of the camera is the same as last year’s flagships — the Mi 11 Pro and the Mi 11 Ultra — the 50MP primary sensor has a larger area, while the attached lens has a bigger, f/1.9 aperture. This sensor’s pixels are also bigger than the OnePlus 10 Pro’s, making room for more details. Lastly, while the Xiaomi flagship also supports OIS, it lacks laser autofocus.

Because the flagships have similar hardware, the performance largely relies on software processing. During our OnePlus 10 Pro review and the Xiaomi 12 Pro hands-on review, the former offered more consistent and natural-looking results. Meanwhile, Xiaomi 12 Pro was often found to mute colors for an artificial look.

When it comes to ultrawide-angle cameras, both feature 50MP cameras with similar f/2.2 aperture lenses. OnePlus here takes the lead by offering a stunning 150-degree field of view (enabled with a special mode) on its flagship. Meanwhile, the Xiaomi 12 Pro’s ultrawide-angle camera is limited to capturing a 115-degree wide span.

Both phones can also capture videos at up to 8K resolution at 24 fps. The Xiaomi 12 Pro also records 4K video at up to 60 fps, but the OnePlus 10 Pro takes it up a notch with 4K at 120 fps. The Xiaomi flagship, on the contrary, bets on slow-motion video with support for ultra-slow-mo at 960 fps. 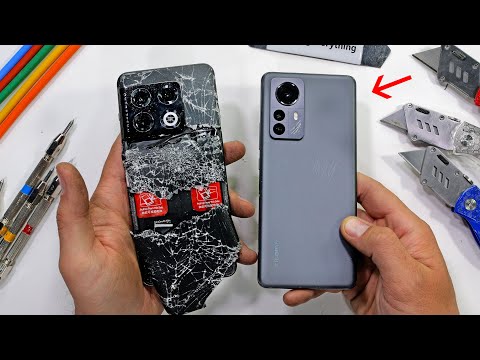 The OnePlus Pro has a starting price of $899, and you can get the carrier-unlocked 8GB + 128GB variant for that much. But if you want more RAM and storage, you will have to shell out $95 extra for the 12GB + 256GB variant. Note that the OnePlus 10 Pro is exclusively available on T-Mobile, and you can also get a subscription for $37.50 per month.

The OnePlus 10 Pro and the Xiaomi 12 Pro are both phenomenal phones at their price, giving tough competition to popular flagship phones such as the Samsung Galaxy S22 Plus and iPhone 13 Pro. For anyone torn between buying any of the two flagships, their minimal differences make the decision even more confusing. But when nuances such as the display's efficiency, high-frame-rate video recording, support for non-proprietary charging standards, the user experience, and, most importantly, the availability in the U.S. come into play, the decision becomes easier than it appears initialement. The two phones are so counterpoised that there is no easy winner, and the decision simply rests on your expectation from a high-end smartphone.

Libellés : Pro and the Xiaomi the